It’s time to get creepy, y’all. Not too long ago I blogged about Eloise Asylum and its creepy history fraught with medical experimentation and locked psychiatric wards. The nightmare doesn’t end there, though. Few people know that Eloise Asylum had its very own graveyard. Many patients died in the asylum, so this was a necessity. It is said that more than 7,000 former patients were buried in the graveyard between 1910 and 1948. Poor patients with no family to claim their bodies were dumped here. Today, the unkept field doesn’t even resemble a graveyard, but with a little research I managed to find it. 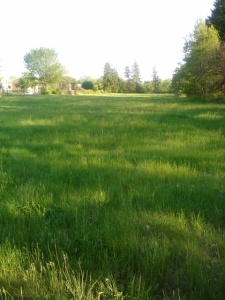 Being the weirdo that I am, I visited Eloise Graveyard just the other day. What I discovered deeply disturbed me. Now, the graveyard is not new to me. I had been there several times before and I don’t find the graveyard itself to be very scary. It’s located across from a low-income housing complex and the other buildings in the area are pretty dilapidated. The area is often frequented by the police because of a crime problem. Let’s just say you wouldn’t want to be caught there at night. I’ve always visited the graveyard with friends in the past, but this time I decided to go alone. I felt comfortable with it and I was familiar with my surroundings, so I wasn’t worried.

I entered the graveyard through a gate and followed a path into the field. On my right was a farmer working the land, so I felt at ease that I wasn’t alone. Sadly, the graveyard hasn’t been cared for in years and many of the gravemarkers have been covered up by overgrowth. There are no tombstones with the names of the dead; just numbered blocks. The graveyard is enclosed by pine trees and a small forest. It’s very peaceful and beautiful. The random shopping carts strewn at the entrance detracted slightly from its beauty, though. 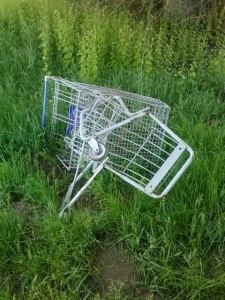 I love to investigate and discover new treasures at every visit. Finding gravemarkers is a challenge, but it’s exciting when you see them. I spent my time taking pictures of the graves and the pretty nature. I even played around in the forest a bit. I definitely want to do a photoshoot here with the forest as a backdrop. Of course I’ll wear crazy outfits and make a fool of myself as usual. 😀 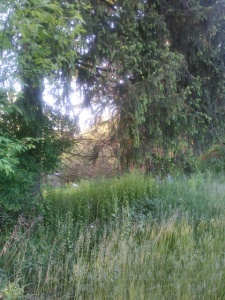 Anyways, I came upon some graves that I had never seen before in a far corner of the graveyard. They appeared to have been recently cleared of overgrowth. I saw something white sticking out of the ground near one of the gravemarkers. It was a long white candle! This warmed my heart. The graveyard had been visited by someone who took the time to clear some brush and leave a token of acknowledgment. And here I thought I was the only one who knew and cared about this place! I found candles placed on several gravemarkers, which was really cool. Nearby, I saw a large hole had been dug between two of the gravemarkers. I thought this was odd, but continued taking pictures and exploring. I can be so slow on the uptake sometimes. 😉 I found some pretty flowers and an interesting clump of fallen branches. But, that weird hole remained on my mind, so I made my way back to it. 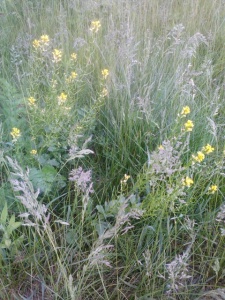 I read the numbers on the graves at either side of the hole: 665 and 667. Oh FUCK. I had finally realized it. Gravemarker 666 had been dug up and stolen. I couldn’t believe it. Who would do such a horrendous thing? That is beyond disrespectful and so very wrong. Then I thought about the significance of the number 666. From what I know, that’s the number of the devil. I’m not religious at all, but that’s fucking scary. I just stood there in horror. The person who cleared off the graves had only done so to find one to steal. So disgusting. It ruined my whole visit. I can’t say that I stayed much longer after this discovery. I was really freaked out and upset. My hope is that someone left the white candles on the surrounding graves to cleanse the area and make peace with the disturbed spirits. Perhaps they made the same discovery as me and tried to make it right. If the candles were left there for a sinister reason, then that makes me sick. Vandalizing a grave is pure evil in my book.

There is another old graveyard (William Ganong Cemetery) just down the road that is said to have vandalism problems. Pentagrams have been found painted on some of the tombstones. Supposedly a kettle was found there with bones and feathers inside of it. I would never set foot in that graveyard, but maybe the same people who vandalized this graveyard stole the 666 gravemarker. The graveyards are so close to one another that I don’t think they are coincidences. Regardless, I doubt I will be back to Eloise Graveyard anytime soon. I don’t feel safe there anymore with crazy people stealing gravemarkers. It makes me really sad, because I truly love this place. I like to visit the spirits and show them that someone cares and remembers them. Their stories need to be told and I won’t let them be forgotten. The asylum will always be a part of my life.